A downloadable game for Windows and Linux

A rogue-lite of deception and stealth in a Machiavellian renaissance setting.

Take on multiple false identities. Fabricate shams. Pull scams. Misrepresent. Sneak. Steal. And make sure to pay off your debt to the local crime lord before your time is out.

What is the Web of Deceit?

In this rogue-lite you play as Nereza Blake, a con artist and burglar, in a procedurally generated renaissance city. You complete scams in order to make money to pay off your debt to the local crime lord Capa Boccini, before he comes for your hide. To achieve your goals, use social deception or stealthy burglary.

In social deception you can craft new false identities for yourself and dupe your mark by lying about the properties of items and citizens. NPCs communicate with each other and propagate their knowledge (as well as false information that they have been fed). Avoid getting caught with a lie before you are done with the mark.

Alternatively, sneak into your victim's house and take what you want. Fighting the guards is not an option for Nereza - you have to rely on careful hiding and nimble stealth.

Eventually each con will inevitably start to crumble and angry citizens will be out for your blood. Be ready to escape into a new identity before you are trapped in your web.


Nereza stealing the guard's customized crossbow right behind their back

We collect analytic data about the gameplay in order to further improve the game. The collection employs the Unity Analytics service. We don't collect any personally identifiable data. The data collected include device information and basic information about the players' interactions with the game such as starting a new game, completing the tutorial etc. For details about what is collected by Unity Analytics (device information in particular) see the Unity Technologies privacy policy: https://unity3d.com/legal/privacy-policy .

Unzip the archive at your preferred location. To start the game, run the binary in the extracted directory: WebOfDeceit.x86 (linux) or Web of Deceit.exe (windows).

Solid premise with two alternating styles of gameplay. The game presents a well done and immersive experience that engages you and challenges you to think ahead.

However, as interesting as a game as this is, I have two complaints.

1. The UI to interact with people and game elements is a bit clunky. It can be tedious to constantly scroll down one window or another looking for the specific item or person to bring up in a conversation, especially after interacting with multiple people.

2. Camera angle can make certain parts of the game, specifically top down stealth, harder than they should be. This shouldn't be something that a player has to fiddle with since the "missions" one is presented with during the gameplay encourage a mix of both gameplay styles in each run. A straight top-down camera as opposed to an angle would be a more traditional approach that more people would be familiar with. I should also note that the random layouts sometimes make  acquiring scam items nearly impossible.

This is a solid game and it presents some fun challenges. Great replayability and gameplay.

Happy to hear you liked the game, and thanks for the review!

I think you make good points. The UI was certainly a challenge with the amount of data that needs to be displayed. As for the camera angle, you may be right. At the same time, a slanted camera allows a more intimate view of the environment.
Best of luck with the project you're working on!

Glad to hear you enjoy the game! Happy grifting! 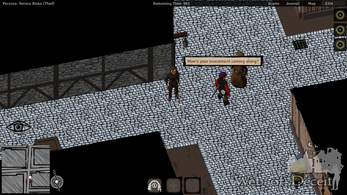 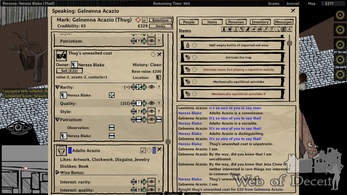 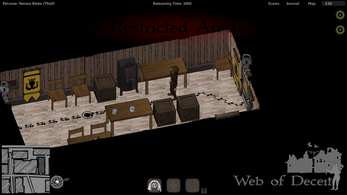 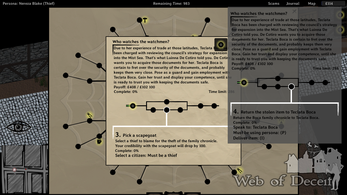